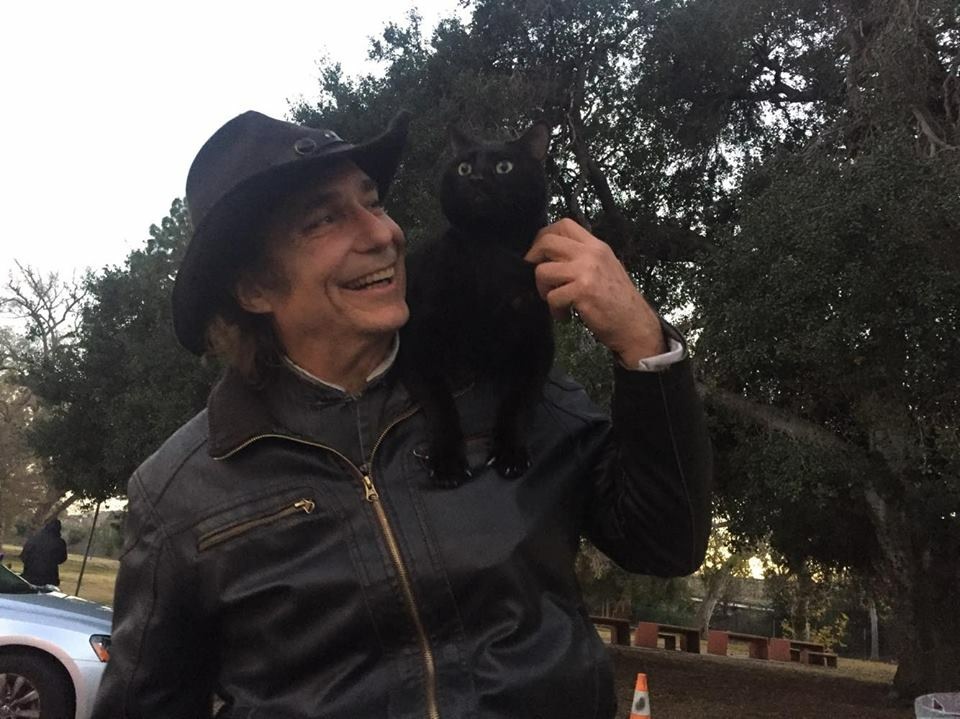 Daily Taoist Buddha Zhen here. Richard Del Connor. And we’re reading from my book, the TAO OF TAOISM based on Lao Tzu’s book, THE BOOK OF CHANGES. Or Dao Te Ching.

The left side of our body is a Yin female polarity.

The left side of our body
is a Yin female polarity
that will only extend itself in friendship
when we trust one another.

So it’s saying this arm over here is — doesn’t always trust you. So the right one…

By offering our left Yin side in friendship we stand alongside the right Yang side of our friend.

So in other words–

Friendship is balanced by trust.

Okay? So in other words really what it’s saying is you’re side by side. As long as you’re facing someone and you’re shaking right hands: Now you’re kind of opposing. You’re both kind of equal. Now, the moment you offer your left hand. See that shifts you over. They put out their right hand and I put out my left, I put over here and I’m facing. So that puts you now side by side.

It’s a very clever little way of kind of– kind of shows something and expounds some other deeper things which I don’t think I really want to get into. Because we’re– But anyway.

The Yin-Yang concepts and female and the– and the hesitation, the trust and the everything–

This is an interesting point: There’s a whole bunch going on. All this is 31b, 31c. I broke it down because there’s so much information in this #31. And I broke it down into these three things.

But this whole thing about the Yin side. The trust. The positive-negative. And being side by side. That means you’re friends. As long as you’re facing each other, you’re not friends. You can be total enemies. When you’re side by side, you’re friends. You have to trust that person. If this person wants to kill you, that’s not the best place to put them. [LAUGHS] You want to have them in front of you where you can see what they’re doing. Wouldn’t want to put them right behind you either.

Okay? See? So anyway, you get the concept.

Describe how you trust people.

Describe HOW you trust people.

How did you develop this trust system?

How did you develop YOUR trust stystem?

How DON’T you trust people?

How don’t you trust people?

How did this DISTRUST develop?

How did you decide where to draw that line?

HOW did this distrust develop?

Whether a man or woman. Everybody.

Some men are much more feminine than women.

The 5 SOUL THEORY kind of all the sudden illuminates them.

But okay, here we go:

To who is your trust extended unconditionally now?

To WHO is your trust extended UNCONDITIONALLY now?

And I don’t know if I should say anything about this now, but I was actually raised on the wrong interpretation I was raised, “Men had CONDITIONAL love,” and “Women had UNCONDITIONAL love.” And it’s COMPLETELY THE OPPOSITE. 100% of the time. Completely the opposite. A woman will only love you when she’s got what she wants and everything’s alright otherwise NO. Totally conditional.

So a man has the unconditional ability built into him much more than a woman does. And I was raised, like I said, to believe just the opposite of that. Totally screwed me up. It messed me up. Because I honestly believed that women had unconditional love. So I expected that. I never found it. So I could’ve saved myself a lot of trouble if I wasn’t pursuing a lie.

Where are we? Five minutes. Okay.

To who is your trust extended UNCONDITIONALLY now?

To who are you uncondiditional?

To whom is your trust extended with reservations now?

Certain things you trust entirely but other things…

WHAT do those you trust unconditionally OFFER YOU?

I’ll read it again. What do those you trust UNCONDITIONALLY offer you?

So by trusting them, what does that give you access to?

What do those you SLIGHTLY DISTRUST offer you?

Okay, then I’ve got my suggestions here. Hey only six minutes! That was a good one.

So yes, this goes to the Yin Yang concepts which I’m totally like rethinking and throwing out. And the– and the Chinese they have this belief that this is the Yin side and Yang side. Which is true if you’re right handed. It’s stronger than this side. It does create a Yin and a Yang.

I just realized in Kung Fu training if I make people think that way they’re gonna think this is stronger than this and they become kind of like wieghted over here.

I kind of wiped out that in all my Kung Fu training. We don’t use the Yin Yang. I say, “Move the energy both ways.” It can come in the Yin and go out the Yin. I do everything both ways. We do our exercises, we do our punching–try to do everything even. Most all the Kung Fu is right-handed. It’s like 70-80% right-handed. You know it’s not a complete exact balance of left and right kicks.

So I’ve created extra drills to bring up the left side of the body. So.. anyway, like I’m saying, I have agreements and disputes with the Yin Yang concept. And that’s the Tao. We can find out realistically how to put it. Now don’t impose certain concepts unnaturally onto Nature. [LAUGHS] You know, sometimes– Okay.

The left side of our body is a Yin female polarity
that will only extend itself in friendship
when we trust another.

So it’s saying, unless she trusts you–you’re not going to get anything.

By offering our left Yin side in friendship
we stand alongside
the right Yang side of our friend.
Friendship is balanced by trust.

So remember, friendship is a side by side relationship.